If you were to ask a High School student in India if she has heard of Suheldev, chances are that she would reply in the negative. Likewise for the battle of Bahraich. Not because Suheldev was a fictional character, or Bahraich a fictional location. This important king and a very significant battle are simply left out of school level text books, quite likely from College or University level text books as well. The reason is because in India, History is taught from the perspective of invaders. This tradition was continued by socialists and Marxist historians after independence, with nefarious intent. Sadly even now, after more than seven decades of independence from the British and a Nationalist government at the helm, no major attempts have been made to revise text books to include the Indian perspective. The importance of this retelling of History from the perspective of Indians is extremely significant to avoid a lopsided view. To borrow an African proverb, quoted often by Sanjeev Sanyal –

“Until the lions have their historians, tales of the hunt shall always glorify the hunter”

Thus, major leaders and events are hidden from the mainstream, Suheldev and the battle of Bahraich among them. To use Amish’s own words –

“Sadly, many of these heroes and heroines have been airbrushed out of our history books.”

Of late, thankfully, we have intellectuals like Sanjeev Sanyal and others playing a vital role in helping people rediscover these heroes. Amar Chitra Katha does its part. And a large part in being played by popular authors like Amish Tripathi, whose brand of historical fiction add color to these events and characters. 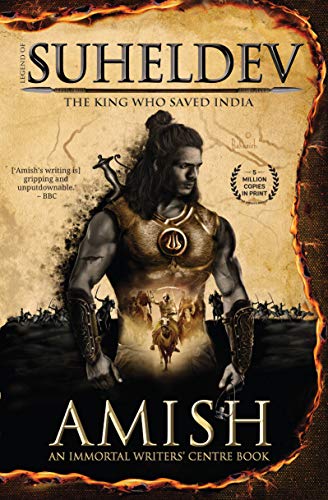 Suheldev is based on the historical character Raja Suheldo Pasi, who led an alliance of Indian kings to rout a large Turkic army in 1033, at the battle of Bahraich. Back then, India was the wealthiest economy in the world. It attracted invaders with the intent of conquest or plunder. Mahmud of Ghazni invaded India seventeen times and destroyed the Somnath temple. The Turks, however, were deterred after Suheldev managed to unite several kingdoms in resistance, and decimated the Turkic army led by Salar Maqsud, Mahmud’s nephew. The damage was so brutal that the Turks did not invade India for the next one hundred fifty years. That is how significant the battle of Bahraich was. And that is why it is all the more significant for popular fiction to unravel such heroes. More people will start asking questions after discovering these missing figures who played a vital role in the continuity of Indian civilization against relentless foreign invasions. Textbooks do not do them justice, but with their infusion into popular consciousness, Governments and committees will have little choice but to revise textbooks to include the likes of Suheldev, Rani Abbakka and Lalitaditya, so history is retold from the lion’s perspective, and not to always glorify the hunter.

In the book’s Foreword, Amish mentions that this book is a team effort, where the first draft is written by something called a “Writer’s Centre”.

“…the genesis of the story and the final writing is done by me, while the team drives the first draft”

This is a strange concept for me, as the first draft is most deeply connected to a writer’s consciousness.  It’s the purest physical link between assimilation of ideas and their outward expression. To give it up to others would mean a lot, and I do not understand the motive behind such compulsion. But I’m not complaining, as long as the journey is good. And for this book, it’s been a very positive experience.

The work is cohesive and fast paced, with the right hooks to keep you engrossed. Don’t be surprised if you want to keep returning to finish it, or even wrap it up in a single sitting. That’s the desired outcome of a well written book, and this one achieves it exceptionally well. Through short chapters and a tight story line, its primary concern is to portray Suheldev’s emergence from a guerilla leader to one leading an Indian alliance to a resounding strategic victory against the Turks.

A theme of Indian unity is prevalent through the book. Hindus, Muslims, Buddhists, Dalits, Kshatriyas forsake their differences to unite against a common enemy. This is essential for preserving the ethos of Indian civilization that the Turks were out to destroy. To quote Sanjeev Sanyal from “The Ocean of Churn” –

“The Turks were unbelievably cruel towards Hindus and even fellow Muslims, but they seem to have reserved their worst for the Buddhists. One possible explanation for this is that they themselves had converted to Islam from Buddhism relatively recently and felt that they had to prove a point”

The narrative is also quite filmic, maybe with deliberate intent. Gory battles, of which there are many, are vividly etched. There is also a hint of romance in the otherwise bloody tale. And an intrigue about Aslan that keeps one guessing until the end. All these elements and a strong sense of patriotism prevalent throughout the book, could be easily espoused to a screenplay, and a Bollywood hit in the hands of a competent director. Perhaps brand Amish already has that in mind. Har Har Mahadev. And a few years from now, if you were to ask a High School student in India if she has heard of Suheldev, you know the answer is likely to be a resounding “yes”.