Life Over Two Beers And Other Stories is Sanyal’s first published work of fiction. In his own words

“—it sent me on a happy journey and I will probably remain primarily a non-fiction writer.”

This collection of mostly satirical short stories is very approachable. A quick read, it elicits a smile or an acknowledgement every now and then during the course of its reading. Acknowledgement of ones familiarity with Indian politics, bureaucracy or simply, Indian-ness.

There are fourteen short stories and a couple of poems in this work. Sanyal is an economist, a former banker turned bureaucrat and draws from his own experiences in corporate and social circles.

“…satire, by its very nature, is based on a caricature of real-world social mores”

We have probably met our Mrs Rudra from the title story, with “large red bindi and kohl-lined eyes”, fudging data for a foreign grant and throwing her weight when faced with the truth

“…I do hope you know who you are talking to…Do you know how many government committees I serve on?”

, seen perpetually stalled government projects, as in “The Caretaker”, met pretentious socialites like Dolly Roy whom Rishi “The Used-Car Salesman” uses unsuspectingly to launch a second career.  Or balked at a gasbag highbrow like Dr. Surojit Halder who unwittingly becomes the subject of a social experiment in “The Intellectuals”. 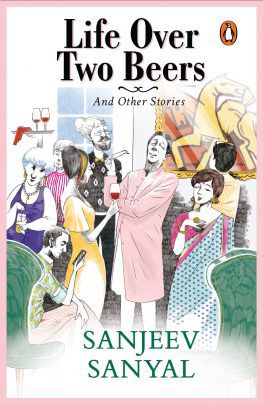 The funniest story is perhaps “The Troll”, where Mrs. Deshpande, a middle class housewife with an anonymous social media alias “Bubbly Bento”, prompts a dubious fact checker website of opposing political views to unravel her real identity, with hilarious outcome. It’s easy for anyone familiar with contemporary political landscape on twitter or other social media to draw parallels.

While a couple of stories, “Waiting till the time of Cow-Dust” and “The Return of Imagination” seem abstruse, the pastime of a hobbyist, a couple of others do stand out, and hints that Sanyal can turn out more poignant pieces.

“The Reunion” – where a Dev, a compulsive gambler milks an old friendship to sustain his obsession, and “Books” – where bibliophile Vishwas, a freelance journalist, discovers his lost collection of books through a chance meeting with a successful businesswoman, who turns out to be the same girl from his village that his father had once tried to get him to marry – make it worthwhile for the reader to anticipate future works of fiction from Sanyal, even if occasionally.