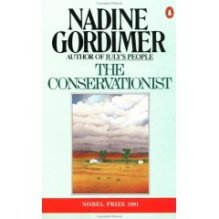 Mehring, a shrewd, successful business tycoon based in South Africa and a sexually prolific if slightly depraved man, buys a farm, somewhat on a whim. It becomes a sanctuary for him, where he escapes on weekends to get away from his stereotyped world and also supervise its functioning, Jacobus and the rest of the black workers in the farm. There’s no story as such but incidents pieced together of Mehing’s life, the farm and its workers and a small time Indian family that runs a nearby shop. Mehring wants a vent from the drudgery of his life of business meetings and social commitments, seeks something missing in his personal relationships torn by a failed marriage, an estranged son, and a left winged girlfriend who has had to flee the country for getting politically entangled. The solitude of the farm, the river running beside it, the outdoor camping, drinking, the joy of defecating in the open, is satisfying. Jacobus, and the rest of the farm boys try to please him. Poor black people. Crafty Indians. We see glimpses of their lives as well.

There is little drama in the book, but wonderful perspectives, of lives from different angles of the South African social strata. The white man, wary of the black, keeping them on a leash, always circumspect of their intent. The black, trying to hold on to the land, trying to gratify its owner, bereft of education or wealth, but not short of compassion or merriment. The Indians, cunning, instinctive, somewhere in between the white and black (brown, yes, but also in a social sense), surviving political turmoils and biased laws.

So why is Mehring a Conservationist? For becoming a part time farmer from pig iron seller, for his trying to preserve the farm, not letting it grow wild and waste(as his girlfriend suggests)? Or is it because he tries to conserve pieces of his life, that though materially successful, appear to him meaningless at times?

2 thoughts on “The Conservationist by Nadine Gordimer”